How did you get into debt? Part 1 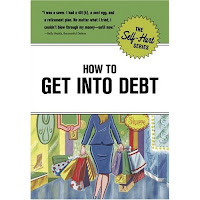 Some people may wonder how in the world you get into debt. Slowly…then quickly.

We actually have been out of debt twice! It was a great feeling while it lasted. Unfortunately, we did not have the knowledge of how or why staying out of debt was so important. It makes me wonder…if paying bills is all you know, how do you know what else to do?

My husband and I did NOT come from wealthy families. In fact, my husband’s family had a very difficult time with money. Although they both worked, they did not know how to budget and there always seemed to be more month than money. When the money ran out, it was always a crisis and they would go to family for help. Which, unfortunately, was quite often. Family members had good intentions in their “help”, but it actually hurt their ability to become financially independent. Not quite the financial legacy you want to pass on to your children. They simply didn’t have the knowledge nor were they going to gain it with family literally preventing their independence each time. The irony is that the “helping” family truly desired them to be financially independent while their actions said the opposite.

I had two, hard-working parents who never seemed to have enough money. Or so that is what they told me. I learned early on if I wanted something, I had to work for it. I was also taught to NEVER ask for money from friends or family. Asking for money only makes the lender have an upper hand on YOUR decisions. I learned how to balance a checkbook at age 16 and if I wanted to participate in sports, drama, or anything else, I had to come up with the money to pay for it. I also had to find a way to pay for my college education…by myself.

It’s not that my parents were harsh or mean with money. They just didn’t have it. They were 36 years old when I went away to college. That is 1 year younger than I am now. Even at this age, I do not have the money to send my children to college.

When my husband and I met, he was a spender and I was the saver. He had credit card debt, I had none. I was very tight with my money, he was not. We both had massive amounts of school loans…and I loved him…a lot!

How did we get into debt again after being out of it twice?

Well…we did not have a full picture of our finances. We moved to the South where my husband took a $20,000 pay cut, but we had a great sale on our first home (this was 6 years ago).  The “extra” cash went towards the new items we needed for our new home.

We finished our basement. That was something we had planned but did not budget properly. We did most of the work ourselves, but then it “needed” new furniture and a theater.

We also had a business that we had been trying to build. It was a network marketing business that was growing, but not covering the expense of the tools needed to build it. Since we “thought” we would eventually make the money, we justified putting the products on credit cards because we would pay them off. Eventually, the company we were affiliated with changed the rules and all the work and growth we put into it just disappeared.

So there we were, no business and no money and quite a bit of debt. We finally realized that we were living on the income we had previously and subsidizing the difference with credit cards. Because we had the extra cash from the sale of our first home, we thought we would pay off the credit cards within the month. However, there was always something else that we needed to pay and eventually that extra cash was gone paying for our living expenses.

In 2007, I met Dave…not personally…but I found out about him. I listened to his show and read his Total Money Makeover book and was convinced that although I thought I knew how to handle money, I really didn’t get it. I started us on the Dave Ramsey plan.

Notice anything odd in the last paragraph I just wrote?

There is a lot of “I” not “We” in it. I was doing it on my own. I figured since I handled the finances, I could get it under control….myself.

Boy was I wrong!

When you try to control a budget without including your spouse, there will be resistance. Why? Your spouse may not see why a budget is needed. My husband thought we were doing great because the bills were getting paid, the lights weren’t shutting off and we had food on the table. A debt battle is not fought well when fought alone.

Then the unthinkable happened. Both of our grandmothers passed away in the same year…within months of each other. We did not have an emergency fund and spent over $5000 to travel and attend their funerals. What was really irking was for four of us to travel to only one of the funerals was $2500 for ONLY 2 nights. YIKES!!

The irony in all of this is that we are not extravagant people. We hardly ever take vacations. We don’t buy name brand clothing. Our cars a used. Our furniture in our house is old and mismatched. But our money was going out the door somewhere in debt land and we couldn’t figure out how to make it go anywhere else.