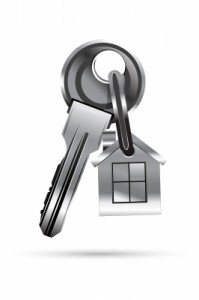 As I have mentioned quite a bit, when my husband and I got married, we were broke. We did not make a lot of money and I never thought I would own a house someday. After years of apartment living, and a few years of moving every 18 months with the military, we decided to buy our first house. This was back in 2000 right before the housing market shot up. We found out we were going to be stationed in Washington DC for a few years so we headed off to Maryland and began our search.

At this point, I should mention that we did not have a down payment. However, because we were military, we could get a VA Loan which gave us 100% of the loan with no PMI (private mortgage insurance). At the time the VA loan rates were a whopping 8%, but we didn’t care, we were happy that we could get our first house. We took the highest amount they would lend us and bought ourselves a $190,000 home.

I loved that house. Granted, it was freezing cold in the winters because it could only have a heat pump {which, by the way, does not work well in the Northeast} and the roof leaked {hubby had to climb up and patch it because we couldn’t afford to replace the roof}, but it was ours {sort of}.

Four years later, we decided to sell the house and move south. We were very blessed that the housing market was booming and the house almost doubled in price. We used some of that cash to put 20% down on our current home and paid of the rest of our debt. I wish that was the happy ending to the story, but the title of my blog is My Debt Free Journey because we stupidly got into debt once again.

(If you are prior military, you can use a VA loan for your home, you need to have a copy of your DD214. Go into your local bank like Wells Fargo and talk to a representative to find out more information.)