Nothing Unhealthy ~ Day 12-15 ~ Still On the Challenge

I stated posting several times in the last few days only to be interrupted and incomplete. I have not given up. I’m still going, but we have had some things taking over our lives like a soon-to-be teenager’s {ahhhhh} birthday celebration weekend.

First, I have continued on the Bodyrock momentum and I will say there are days that it feels like I’m improving and then others that make my legs feel like lead. I know it is a good thing that the exercises don’t become too easy because that means I am still pushing myself beyond my limits and gaining strength. On Friday, I had the throw-uppy feeling again. I don’t like!

Second, I have not lost one pound. Two things could be happening here. One: my muscle is strengthening and muscle weighs more than fat. Second: I haven’t totally given up cheat foods. I’m guessing both are in play here. That is okay. My goal was to get exercise in my routine, not lose a bunch of weight.

Bodyrock is great because it gives you two active rest days. Boy did I need them! She had some killer leg workouts and walking was a challenge. I did not exercise all weekend. This weekend is the prime example of cheat foods. My soon-to-be teen {ahhhhh} had a plethora of girls for a sleepover and I was requested to make her favorite Bailey’s Irish Creme chocolate cake WITH peanut butter frosting. It was delicious! 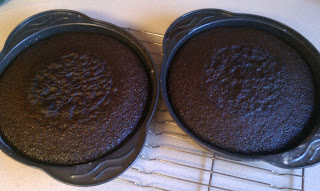 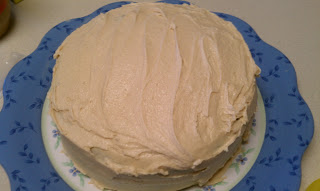 During the time I wasn’t blogging I did have good things like Greek yogurt, cheese, hummus. I also had this beautiful salad. 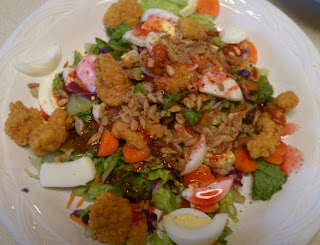 Last night I did go out on a date night to Genghis Grill. It’s a restaurant where you choose your meats, seasoning and veggies and they stir fry it for you. It’s a great way to get a lot of healthy veggies at one time. I would have taken a picture, but we were in a rush to make a movie.

There you have it, four days that flew by and got lost in life. As of tomorrow I will be a mom to a teenager {ahhhhh}!