Black Friday this year was different. Rather than stores opening at 3AM, many of them opened at midnight. Being a night owl, it was a little easier for me to stay up later than get up early. At Thanksgiving, my mom offered to have my kids sleep over so my husband and I could go stand in line at Best Buy. There were a couple things we wanted to get that were dirt cheap. We normally don’t look for specific items, but we had been shopping around for a few months for one of these items and couldn’t believe the low price they were offering. {I am being VERY unspecific since my daughter reads this blog and she will figure out what we are doing if I tell you what we were buying.}

We got to Best Buy at 10:30PM on Thursday night. There was quite a line already. It was really cold and I stupidly forgot my gloves. {I had heard people had been camping out since Tuesday! Now THAT is crazy!}  You can’t even see the Best Buy sign in this picture! 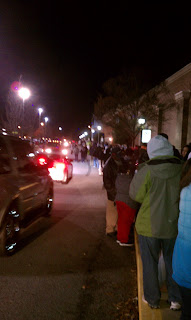 We chatted with others in line to figure out if they were going for the same thing we were trying to snag. Fortunately, they were all looking for something different.

At about 11:30PM Best Buy employees started going down the line with “tickets” for the items they were advertising. If you got a ticket, you got the item. If not, oh well. {We did not get a ticket for the item we were hoping to get, but we did have a few other items we wanted that were available.} One kid in the front of the line collected many of the tickets and then tried to sell them for $25 each. By the time he got to us he still had quite a handful. {I’m thinking his entrepreneurial idea backfired.}

When it was a few minutes to midnight, I noticed a group of people standing directly across from the doors. I realized that they were going to try to rush the doors as soon as they opened. 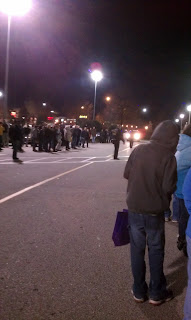 I was right! As soon as the doors opened they all ran across the street. What they were not expecting was the police officers to push them all back. HA HA! They all went back to the curb and waited for a chance to do it again. The officers did a great job keeping them from jumping the line! After a while, I think they got the idea that they needed to get at the end if they wanted to get in. No one who had been standing there for an hour and a half in the cold was going to let them cut. When we got close to the front, my husband thanked the officers for keeping them back. The officer told us if we see anyone trying to get in line just to point them out.

Best Buy did a phenomenal job with security, lines, and organization. We went in, found our items and only had to stand in line for no more than 30 minutes. One employee told us they planned a month in advance for this night.

Our next stop was Walmart. There was nothing I wanted to get there, but we went to get a gift that my mom wanted to give. Since she had my kids for the night, it was the least we could do to go pick up the item that was on her list.and save her a trip to the store.

When we left it was 2AM and I was done! I just wanted to get in my warm bed and sleep. We were able to save almost $200 just by waiting in line early. If I were to do it again, I probably would make sure I had those hand warmers and gloves. It was an interesting Black Friday experience that I may or may not do again. It all depends on the deal.