Going to the Chapel… 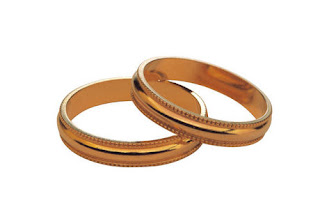 …and we’re gonna get maaaarried. Come on; sing along, you know the song, don’t you?

This past weekend I got to see one of my young cousins get married to the love of his life. It was a beautiful ceremony, set outside amidst that falling leaves and cool weather. Watching this young couple, brought me back to the time I was that young and getting married…and broke.

When I got married, I was finishing my student teaching and my husband was in the middle of finals. At that time, I could not find a teaching position and had to pick up temp jobs where I could. My husband was not only finishing his nursing degree, but working at a hospital and DJing weddings on weekends. It was a crazy busy life. If I had the knowledge about finances then that I do now, I would have done a few things differently:

Originally we had no idea where we wanted to go for a honeymoon. Many of our friends who were already married did simple things like a cabin in the mountains or driving throughout certain states visiting certain attractions. Us? Somehow we were talked into a cruise by a travel agent. We were told that on a cruise EVERYTHING was paid for: food, shows, etc. What we were not told is that if you want to do anything of the boat you have to pay for it. You also have to tip at the end which is not cheap! I was shocked at how many people we had to tip even those that hardly did anything for us. Also in that time, cruises were not as inexpensive as they are now. I believe we shelled out $2500 for our 5 day Holiday cruise {we got married the week before Christmas} and then another several hundred for the 2 day stay at a hotel in Miami. For 2 broke college kids {one grad, one not yet} that was a LOT of money.

{Note: The one good thing that did happen is that we did not book our trip through the agent who talked us into the cruise. We called an uncle who owned a travel agency in another state and they did the best at finding us the lowest rate and best room. Plus they gave us a wonderful gift of flowers when we got on board. Probably should have called him first.}

Would not have registered for China

I’m not talking about the country here. I mean the dishes. You know the ones that are currently sitting looking pretty in the china cabinet. The ones we NEVER use.

I should have stuck to my gut on this one. I did not want china dishes because I knew I probably wouldn’t use them. I picked out a pretty and inexpensive pattern with the hopes that no one would buy them for me. I was wrong. I got the entire set. Did I return them? Noooo. Not sure why, but I sure could have had a chunk-o-change if I did. I ended up keeping them packed up for 4 years while we moved from place to place. Now they are on display in my china cabinet. We have maybe used them a half dozen times. What a waste!

I really LOVE our wedding bands; however, I wish we had fallen in love with ones that were a bit cheaper. I was already frugal prior to getting married, but when it came to our wedding bands, that went out the window. For some reason, I wanted us to have matching bands. {I must have thought there was some flashing beacon that told all women that my husband belonged to me because he matched my band.} We ended up choosing gold bands that had 7 diamonds placed diagonally in the middle. Beautiful…yes! Cheap..NO!! The irony in that is that after I had our first son, I inexplicably became allergic to wearing gold. Every time I would wear my gold wedding band, I would break out into a red rash on my finger and then could not wear anything for a month so it would go away. Needless to say, I can’t even wear it anymore. I got 8 good years from that wedding band.

Not used a limo

There were 3 things my husband and I were responsible for paying ourselves: the pastor’s fee/boarding, photographer, and our ride to and from the church. We had asked our college chaplain to marry us, but he lived in another state, so there was a set cost there. The photographer was a great photographer, but he was working for a crappy company so in order to get him we had to go through them. They were not cheap and not friendly!

The third thing was our ride. We opted for a limo because we needed something to transport all our bridal party to the church. We should have just had them drive themselves and hitched a ride. My parents gave us a beautiful wedding and I guess I thought a limo was the best way to go. I mean, I had used one for the prom one year in high school, but I don’t remember paying for that so I was oblivious to the expense. Looking back, it really wasn’t a necessity. We could have driven ourselves to the reception. The Cinderella story got in the way. At the end of the story, Cinderella gets into a carriage and you see her kissing her new husband as they are whisked away to happily-ever-after. I think that is what I had envisioned. It was a lovely, short ride to the reception. But we sure had a chatty driver and he talked our ears off all the way to the reception and then after when he drove us to the hotel once the reception was over. By that time I was exhausted from the events of the day and just wanted him to shut up.

They always say hindsight is 20/20 and I can see now where we could have saved then. I remember going through a couple’s class, but I don’t recall a financial talk except that it can be difficult. I would encourage newly engaged couples to take a Dave Ramsey class so they go into their marriage financially prepared. My hope and prayer for my young cousin and his new wife is that they make smart financial decisions. Because when you think you know about finances {like I did} you sometimes don’t.

What would you go back and change about your wedding plans?