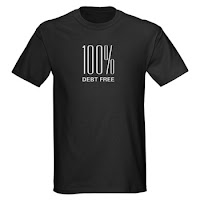 We had a great FPU class last night!  It was week 9 Of Mice and Mutual Funds.  What a great way to learn about something that seems so foreign!

Prior to our small group starting, we always invite people over early to socialize and eat.  One of the young couples told us some amazing news…they are DEBT FREE INCLUDING their house!!!!  Can you believe it!

It was a goal of the husband to have everything paid off before he turned 30.  Four days before his 30th birthday, he walked into the bank and made the final payment on his home.  AMAZING!!

This couple had been working the last seven years to reach this goal.  Can you imagine being 23 and deciding that you would be debt-free by 30?  That takes a lot of discipline and maturity. There were MANY things they had to give up to reach that goal.  One of them was that they did not take any vacations for those 7 years. They also lived on one income while putting all of the second income into debt.

It is such an inspiration to know that it CAN be done and in a relatively short amount of time. Yay for them!!!!