Yesterday I was in the kitchen ALL.DAY.LONG. Funny thing, though, I didn’t bake any cookies. Instead, I was cooking from scratch!

I may have mentioned this before, but I am not one who likes to cook. That doesn’t mean I don’t know how to cook, I just prefer to do other things than slave over a stove. {Plus, when I cook a lot, I have a hard time enjoying the end product if I’ve been smelling it all day. Anyone else have this problem?} Yesterday, I tackled homemade marinara sauce. It was my first attempt at cooking a big batch from scratch. It was okay. I think I am going to tweak the recipe.

While that was simmering, I made two lasagnas. I found out the previous evening that a neighbor is very ill and had been in and out of the hospital. I brought the family a meal since I know the wife works late and they tend to grab dinners on the run.

After all the cooking…I did get to try the candied pecans that my husband was dying for me to make. OMGoodness!! They are AWESOME!! So glad I found the recipe on Pinterest and elm street life blog! 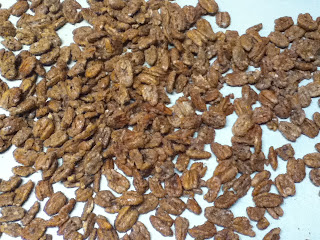 Here is the recipe:

A pinch of nutmeg

2. In a large mixing bowl, whisk together egg whites, vanilla, and water until frothy. In a smaller bowl, mix together sugar, salt, cinnamon, and nutmeg.

3. Add pecans to egg whites and stir to coat them evenly. Then add sugar mixture and toss nuts to coat them. Spread the nuts on prepared baking sheets.

I know I won’t have any of these left to add with the cookies I’m going to be baking.