Nothing Unhealthy ~ Day 4 ~ The PopTarts Called my Name

Yes they did! Ahhhh-nnna, Ahhhh-nnna {I pronounce my name On a, by the way}.

It didn’t matter that I had a good healthy oatmeal breakfast. Or the BLT lunch with cucumbers my hubby made me. Nooooo…

Even dinner was fabulous! We had grilled pork chops with caprese salad and sauted green beans with almonds.

I mean LOOK at this spread! Yummo! 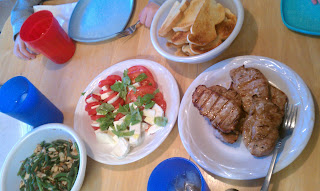 I even had a few M&M’s to try to curb the sweet tooth that suddenly developed! Didn’t make a dent. We had dinner at 5PM and by 8PM I was hungry…again…

I gave in…I had the brown sugar and cinnamon PopTarts and they were gooooooooood! The last pack. They were just sitting there taunting me for the last 3 days. I had to end them.

Gone….with a cold glass of milk.