As you know I have a good friend who puts out monthly challenges and blog about them.  I wanted to announce her March challenge since March is ONE day away. {Seriously…where is the time going?!?}

This month Bushel and a Peck is challenging us to 31 Days of Kicking a Bad Habit. 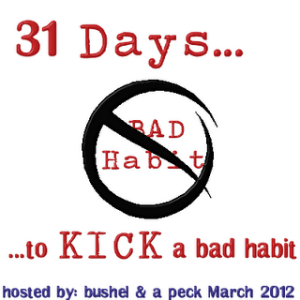 Do you have one of those? I have plenty, but I only have to kick one to the curb.

When it comes to finances it might be that you spend too much money on clothes, lunches, lattes. Or maybe it’s not having a budget. If it’s food, it could be sweets or not enough veggies. Or maybe you skip a meal or two. Whatever it is, this could be a month you change that bad habit.

As I pondered which bad habit to kick. One just smacked me in the face today. My biggest bad habit that I really need to get rid of and have lots of trouble of letting go is playing games on Facebook…one game in particular…Frontierville. It’s not that it’s a horrible game, but I can sure waste a LOT of time on it. That is what hit me today. As I was waiting for some information for a website I was working on, I decided to play some of the game to pass the time. A looooong time later {I’m too ashamed to admit how much time I wasted} I realized I could have done other things. I could have folded the laundry that has been sitting in my room for the last two days or started a new load. I could have made the bed or help my husband make dinner. {Okay, I’m glad I didn’t help with dinner because I needed the break from feeding people.} Whatever the case, I had a ton of other things to do, but I used my time to play a game. *sigh*

It might not seem difficult to some people to stop playing a game, but it might be for me. It’s my escape. I play this particular game because it gives me a break from the real world. Like a Wii game or an Xbox game, it is an escape to a world where things get cleaned up and accomplished in a relatively short amount of time. In my real world, it takes me a lot longer to get things accomplished. I think playing the game provides me with an excuse to not face the long list of things I do not like to do. {laundry, cleaning, cooking…can I get an amen!}

I know that blogging about this bad habit will keep me accountable in my quest to let it go. This challenge is not something that I will blog about everyday, but I will periodically update my success and/or failures.

If you want to read about the challenge, visit Bushel and a Peck.

What bad habit would you like to kick to the curb?